Roadmap of How to Build a Video Chat App 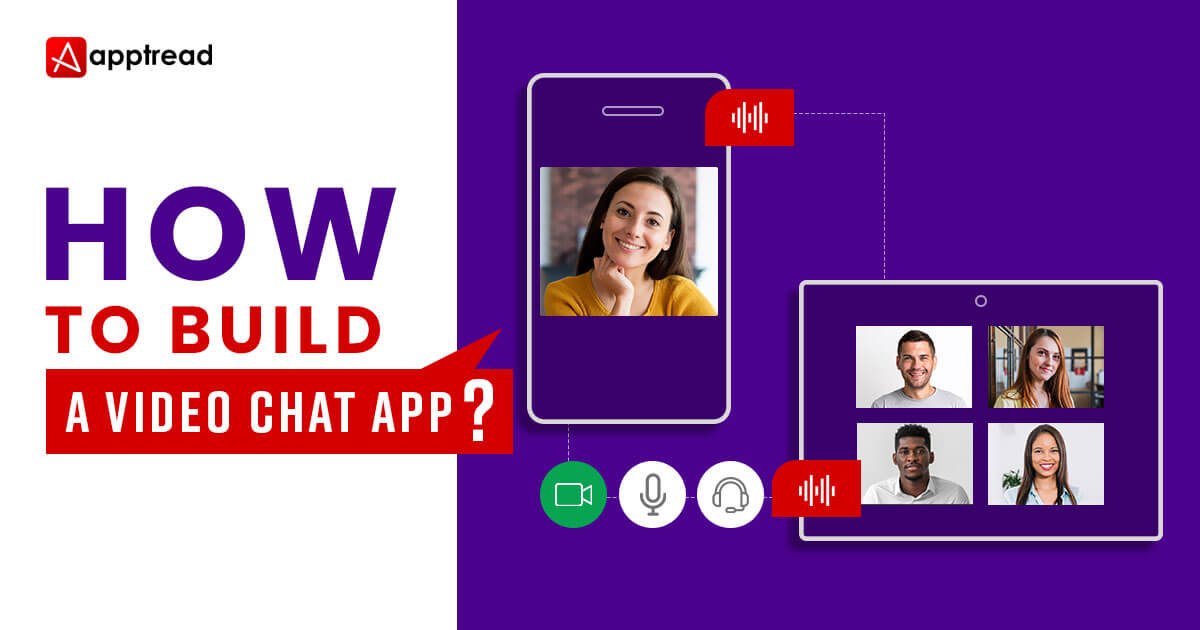 Living in the informational age of digital life and online communication, video chat apps have become an integral part of our day-to-day lives. And as the COVID 19 pandemic has disrupted normal operations & work from home has become the new normal, companies have started connecting via video chat apps to conduct team meetings. This has led to a great scope of the market for mobile application development companies. Many startups and big organizations like Reliance have started working on video chat app development to cater to the surging need.

To move forward with the app development process, one needs to work on the basic feature they would like to keep in their video-conferencing application.

Here are the must-have features in the video chat apps of 2020:

Convenient and simple registration is the best way of greeting users standing at the starting point of your application. Make sure that users do not have problems with the registration process & give them a choice between sign-up via social networks or short manual registration.

As the registration is done, a unique user adds up to your app’s ecosystem. Their identifier generates a profile with all known data, avatar, network status, as well as the possibility to customize it for themselves. When creating a user profile, follow the basic rules & allow leaving some data private, and add an online/offline status display.

Having become a unique user of your app, the user is free to search, add, and perform various actions with other users. To enable your users to do that, you can develop a simple app permissions system so that the admins have the controlling rights on performing such actions.

Voice & video feature is a much-needed feature in a video conferencing app. To establish it, the Publisher-Subscriber pattern needs to be set up.

Voice and video calls are very popular both for friendly communication & get along well in the corporate environment for meetings and interviews, so you should include this feature at any cost during the app development process. This feature allows creating and inviting users to groups for communication in a specific circle of people, the average number is 5-30 people.

This essential feature for any chat app informs users about new messages or any other changes in the chat/call. To implement this function, use the API of Google, Amazon, Apple operators

Cloud can help in storing files & protect data in case of breakdowns of the physical device, and support changes on all devices. Cloud synchronization will help maintain the app functionality even offline or with a weak Internet connection and also saving battery power is an appealing feature.

After you have decided on a list of features, the question arises of how to implement them, in other words, build a video chat app. Our next section will help you with this question.

How to build a mobile video conferencing app?

To smooth your bumpy ride of making a video conferencing app, we have compiled a list of crucial steps in which we touched on both general development rules and their planning, as well as specific characteristics of our company.

Idea formulation for a video chat app requires thorough research and market analysis. Consider potential competitors and the state of the market if it’s saturated with identical apps and does not leave a chance for adaptability for a high-end video conferencing product.

Once the analysis is done, then only you should proceed to the next stage of Product Strategy, which helps to set the necessary accents and relate the theoretical and practical stages of creating a video chat application.

Also Read: Steps on how to choose the right Software Development Partner

Product Strategy is a logical follow-up to research and market analysis. This stage is crucial as it involves a high-scale product development plan that covers not only the technical side but also marketing, sales, and all other aspects

Product Strategy & identification of the target audience go hand in hand: you have to ask yourself who needs your product and why? Your target audience can also be segregated within the Millenials and corporates who will need the video app for meetings and conducting interviews. This will help you in making your App a success.

Once the product strategy & TA is identified, a roadmap is laid out by the client keeping the development vendor in the loop.

The roadmap is a strategic plan that has sets of features and is formulated with markups of months & quarterly achievements by the client mentioning the specifications. The vendor needs to adopt the roadmap and agree to the content set & deadlines. To implement all projects on time, we advise you not to set specific dates, but to select weeks or months and highlight critical dates.

Nowadays, Android & iOS, these two platforms have covered 99% of mobile development. Let’s look at both options and decide which OS is best suited specifically for your case.

Android has already captured over 80% of the market and The growth stats are still growing all over the globe. Although there are certain aspects you should take into consideration while asking yourself how to make a live video chat app on the Android platform:

Work on multiple devices. The number of supported devices provides Android an added advantage. Android OS is supported on smartphones, tablets, TVs, watches, so you will get access to the largest audience possible. It helps your sales and profits grow with the audience, enabling you to use multiple channels to increase sales and profits. The key market of google play is the USA, Eastern Europe, and Asia with more than 70% of users.

Quality over quantity — iOS is guided by this slogan in a contest with Android. Where a more popular competitor cannot be successful, Apple devices have a clear advantage. Such benefits of iOS mobile development confirm:

In mobile app development, prototyping is the beginning of your app’s design, how it will look and feel while the user is using it. It allows you to consider the future appearance & how the app will appeal to its users, the structure of the interface, and experience & usability while you are calling in a video chat app. These errors will be much more troublesome to fix during the UI/UX phase.

Usually, this process is carried out along with wireframing and done in three stages. The conceptual stage is sorted using a whiteboard with markers, then for interactive and animated you will need special tools like Proto.io, axure, etc that allow designers to imitate the look, test performance, and improve user experience without coding.

Once the prototyping is checked by the client, they can approve a final version, through which you can start with the design process.

Once the client has checked several prototypes and approved the final and best version, the design phase begins directly. Here a plan is laid out for the visual, color themes, and shapes & icons of the video conferencing app.

UI and UX are two sides of the design phase and are different. So their implementation order matters for the development flow, I.e, UX precedes UI.

UX is responsible for the intuitiveness, logic, and interconnections between the design of the application which can help you create the best experience for the end-user, just while working on it.

When designing and building a multi-user video chat app, it’s important to think from the futuristic intuitiveness and logic of the users using the video conferencing app. The UX needs to include features that make the users continue with the chat even when the conference is ongoing For example, Skype is a typical example of a non-intuitive UX, where it’s hard to understand how to interact with the app during the video calling.

Once the UX is figured out, the UI can be handled easily by the team as it involves elaborate graphics, their placement, color themes, icon placement, dark/light theme, etc. Once the UI is fully developed and the application shell is formed, it can be transferred to the backend development.

When the internal UI/UX connections are created, it is time to establish external ones — the app server, the webserver, and the database. Once the core of backend architecture is defined, functionality can be worked out.

The video chat app backend development is more about its optimization as the app is going to have thousands of ongoing video calls, enormous chats at a single time, the app will require strong hardware and computing power with firm performance tuning.

To create a potent video conferencing app, it is advised to have a bank of experienced developers as they can have a great deal of impact on your backend development and might as well speed up the development process by code optimization and fixing the scalability issues.

As the backend is complete, the team of QA & testing takes over to overcome the shortcomings in product quality, future problem prevention. Without this stage, the application release can be hampered with loads of functionality issues and bugs which will lead to the failure of your newly launched conferencing application.

Depending on the app’s functionality, the number of tests may vary during the development process. Although the app development process should have a testing team working alongside to cross all the bugs then and there with an optimal number of manual and automated tests. The main QA tests that are needed for mobile development include:

For every mobile video conferencing app a particular set of QA tests is applied, recurring throughout the full development process.

After the beta version release, the feedback from end-users is collected, on which basis developers are making changes for product improvement. Be it improvements or implementation of entirely new features, regression tests are usually applied, and they account for the lion’s share of testing time.

The A/B test is conducted at this stage, helping in practical ways to determine the audience’s experience towards your app. This test is used to create and release two functionally different versions of the product to track user reactions. The most successful version is refined and released as the final version.

Once the changes are approved during the Beta testing phase, the application is all set to be prepped for the release phase. This involves the deployment of the app on a web server and app store. The team can work out the most encountered challenges faced during the implementation and deployment of the project and fix the issues.

The year 2020 has been full of uncertainties and made virtual life our new normal. With social distancing being the top priority, companies have deployed their teams to work online. Here comes the ever-growing demand for video chat apps.

Prove your spot in the market with the help of Apptread – a software development company. Have an application development idea in mind?

Book a consultation for free: https://apptread.com/contact